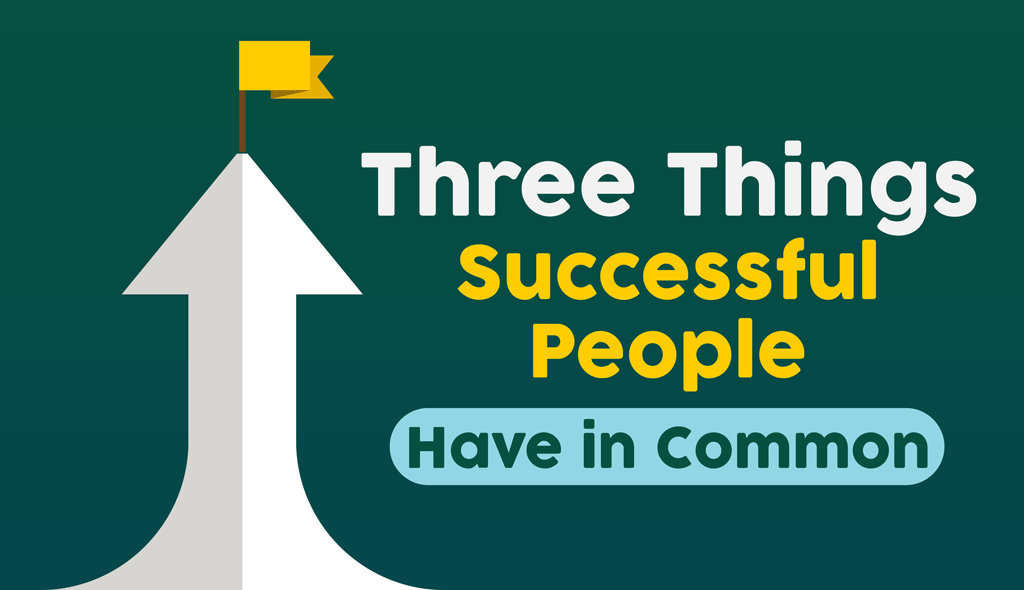 Success is something many people strive for. They want to be successful at work, at home, with their children, with their health. Often, success seems to be elusive. It’s just out of reach. However, success isn’t purposefully running from people. Many people find it, and some people find success in abundance.

What is it about those people, who seem to be gifted to succeed? Do they have an invisible rocket strapped to their back? Do they have a fairy godmother? Were they born to be successful?

Perhaps. But, it’s more likely that people, who are extremely successful, have one thing in common.

Successful people have relentless work habits. While the standard American workweek is 40 hours, the most successful people spend 60-65 hours a week working. Yet, working long hours is not the sole solution to finding success. According to Jeffrey Pfeffer, a Stanford professor, if no one notices your hard work, your good job performance won’t lead to promotion. 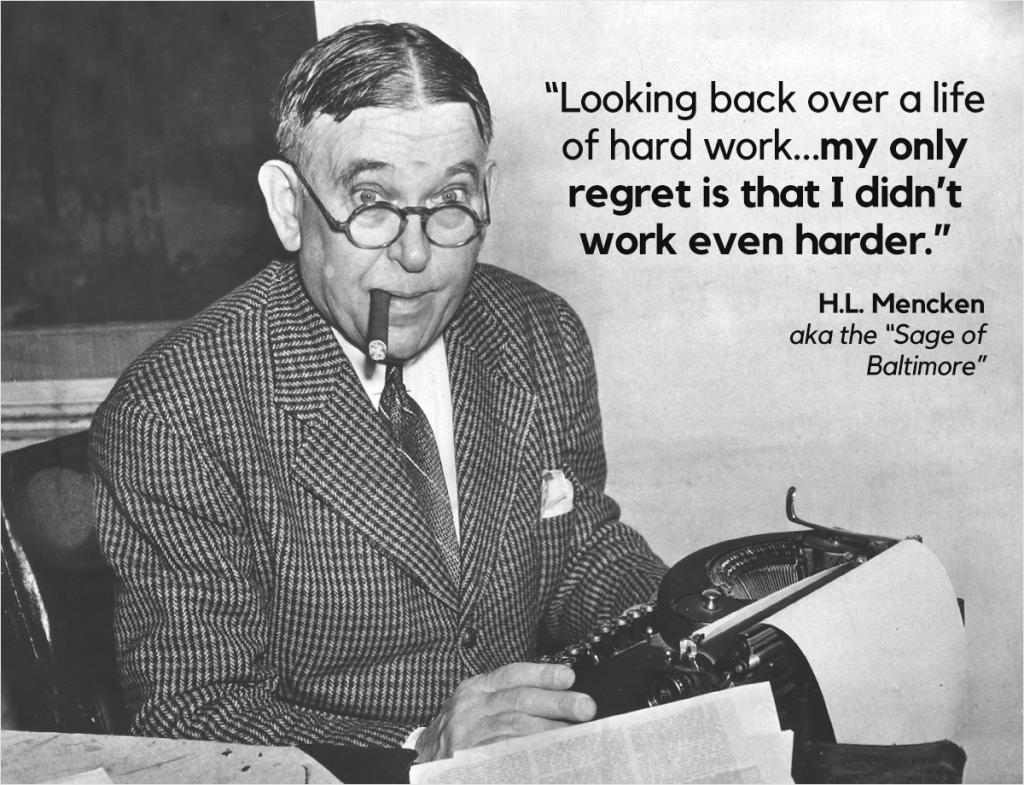 A friend of mine was the acting branch chief of an organization for six months. She worked extraordinarily long hours, leaving the house at 5:00 AM and often not returning home until 7:00 or 8:00 PM. She was dedicated to her job, working diligently, even devoting time on the weekends. Yet, when the six-month mark arrived, her boss was not happy with her. My friend hadn’t focused on what her boss had wanted her to.

This occurred for two reasons:

Her boss hadn’t made clear what she expected of my friend. My friend hadn’t asked for clarification.

According to Robert M. Galford, Harvard Business Review, while each job is different, there are certain things you can do to meet your supervisors’ expectations across the board. These include:

Focus on the numbers and project completion. Doing these two things in a timely manner can gain your boss’s attention in a very good way.

Know your company’s clients. The direction a company usually goes in partially depends on the clients. If you don’t know what your clients are looking for, and what has and is currently being done for them, you can’t help the clients, and your company, progress.

Recognize where your company is headed in the long term. Focusing on the bottom line is great, however also keeping an eye on your company’s long term goals will help you to stay focused, and to generate new ideas that are in line with the company’s objectives.

Know your co-workers and the people your boss associates with professionally. Find out what makes them tick: “their strengths, weaknesses, and potential.”
Create a circle of people around you, who trust you and each other. You and your confidants will help each other stay up to date and guide each other through assignments and goals.

Uncover problems earlier before they become big roadblocks. Figure out how to solve these issues in a timely manner.

Get along with other people. Have the confidence to “say what you think” and respect what other peoples’ viewpoints are. 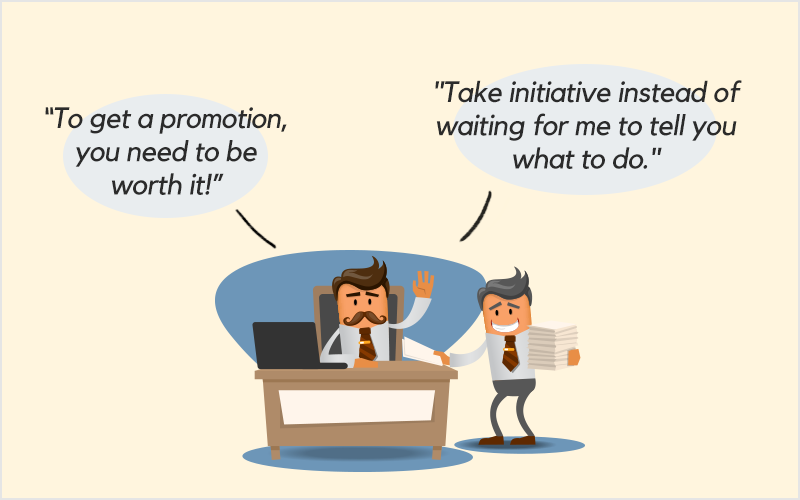 As Jeffrey Pfeffer said, “Keep your boss happy … If your boss isn’t happy with you, I don’t care what else you’re doing, you’re going to have trouble.”

Utilize time management. “Get it done now” is the mantra Thomas C. Corley uses, and knows that his richest clients use, to keep himself from procrastinating. In his book, Rich Habits, he explains how success comes from not stopping until the assignment is completed.

In order to work diligently until a task is completed, and to seek out success and power, you need phenomenal time management skills.

A to-do list is great. However, it’s only a first step. You need to take each item on your to-do list and pencil them into your schedule. This helps you to: be realistic with what you can accomplish makes you more efficient with what time you have.

“A list should reflect a time estimate needed for each task. And it should be integrated into a calendar or schedule, to avoid “planning 17 things for tomorrow which, if you added them up, are going to take 20 hours,” says Julie Morgenstern, time management expert and author of bestseller Organizing from the Inside Out.

In fact, according to Cal Newport, Georgetown professor with a PhD from MIT, “assigning work to times reduces the urge to procrastinate. You are no longer deciding whether or not to work during a given period; the decision is already made.” 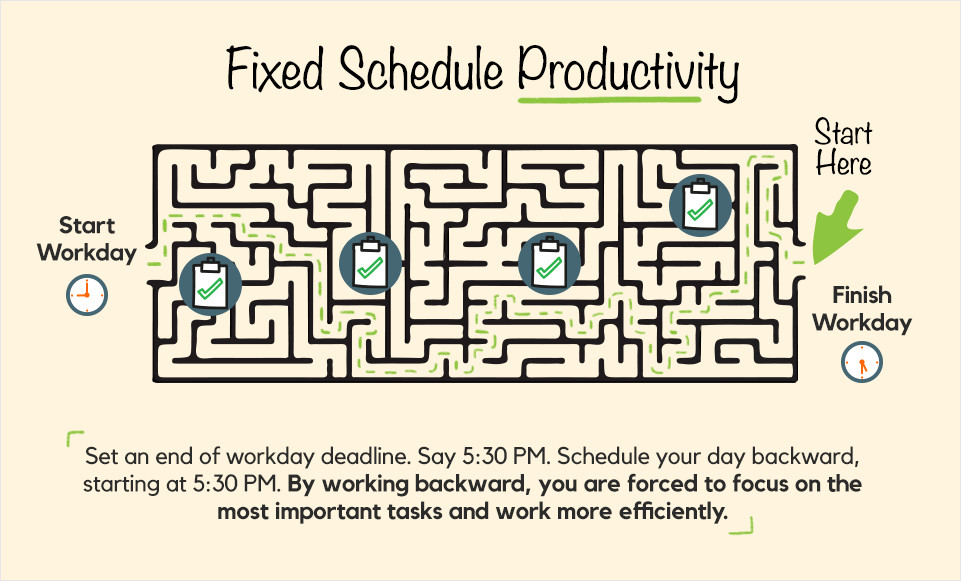 As you’re building your schedule, look at more than the hours on your calendar, as seen in the graphic above created with Visme. Successful people know to utilize the 1,440 minutes in each day. 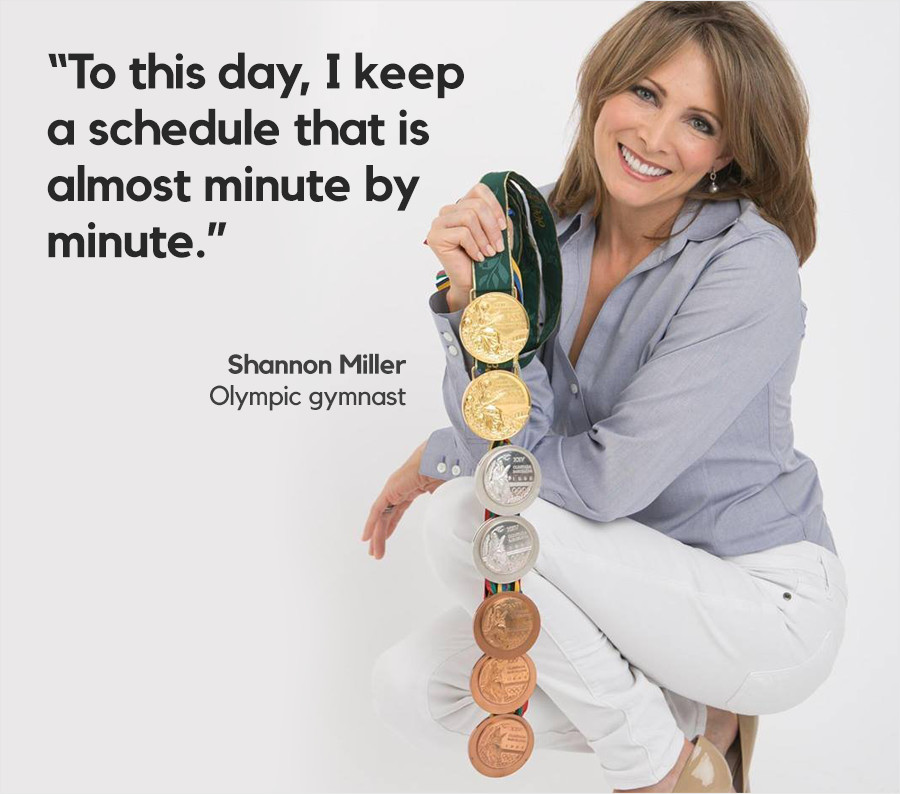 When you’re creating your schedule, remember to focus on one thing at a time. The concept of multitasking—doing multiple activities at once—is a myth.

JoAnn Deak, a psychologist and author of Your Fantastic Elastic Brain Stretch It, Shape It, explains how multitasking increases the amount of time spent on a task and can more than double the amount of mistakes made.

Research repeatedly shows how instead of focusing on multiple tasks at once, our attention switches rapidly between the various tasks. Follow this link and take a test showcasing the detrimental effects of multitasking: The Myth of Multitasking.

Have strict, daily rituals. Mornings aren’t for hitting the snooze button on the alarm clock. They’re not for hectically rushing around, attempting to gather everything needed before you’re late for work. Mornings are for rising early.

Laura Vanderkam, author of What the Most Successful People Do Before Breakfast, found that high-achievers have morning rituals. Waking up early, helps give you time to prepare for what the day will bring. Here are some of the morning rituals of highly successful people, visualized in the graphic below created with Visme: 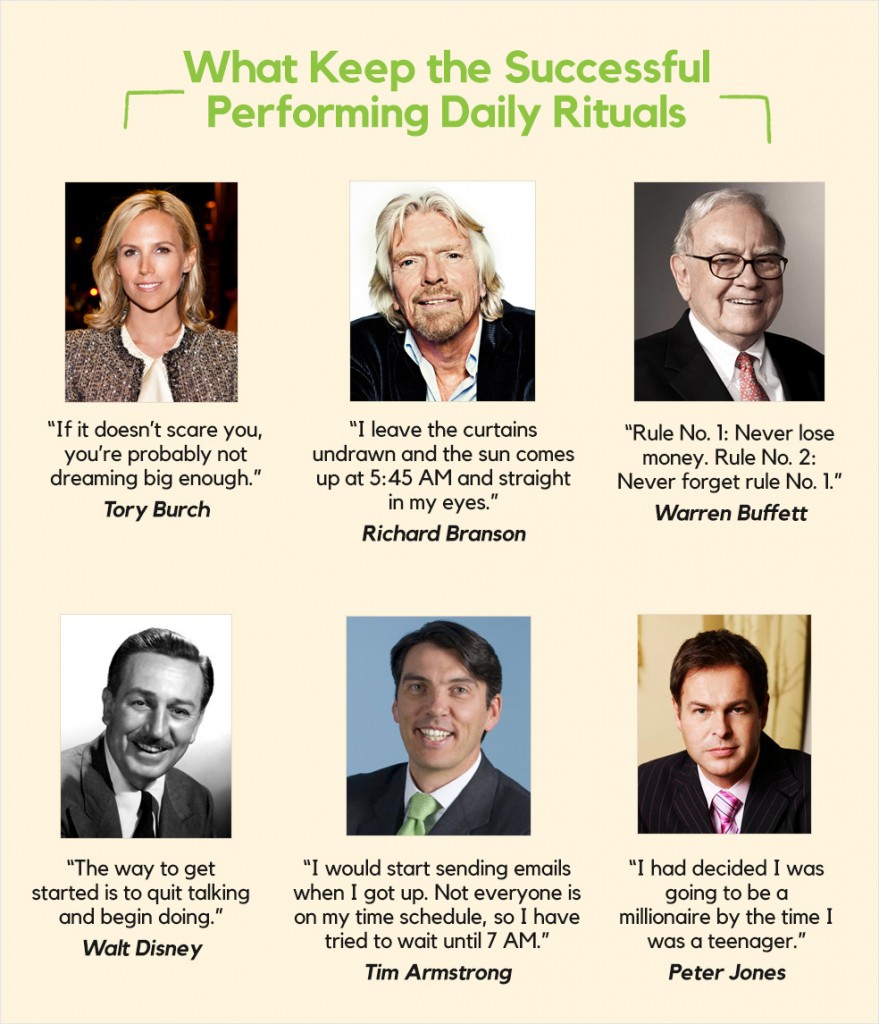 Steve Jobs looked at himself in the mirror each morning and asked himself one question: “If today was the last day of my life, would I be happy with what I’m about to do today?” An occasional ‘no’ was okay, however if Jobs had too many ‘no’ answers in a row, he realized that something about his routine needed to change.

Barack Obama works out at 6:45 AM every morning. Then, he has breakfast with his family and helps his daughters get ready for school.

Tory Burch, fashion designer and CEO, wakes up at 5:45 AM, checks work emails, and then wakes her three sons up. The family exercises for forty-five minutes before going about the rest of their day.

Mark Zuckerberg enforces his own dress uniform. By wearing the same type of clothing each day, he has “one less decision to make.”

Peter Jones, a Dragon’s Den investor, showers, shaves, and has breakfast within twenty minutes of waking. He’s then out the door, drinking a cappuccino and looking at sales figures, as he heads to work.

Bill Gates works out on the treadmill for an hour every morning. He watches Teaching Company courses as he exercises.

But it more than just the morning that contains rituals. Successful people know that their brains are sharpest “2.5 to 4 hours after waking.” Therefore, successful people focus on their most important work during that time period.

Too often people get to work and start checking emails or attending meetings, while planning to do the most important work later on in the day. Save the calls, meetings, and other busy work for when your energy is lower. When your brainpower is high, focus your attention on challenging and creative work.

The longer people are awake, the harder it is to maintain self-control. Roy Baumeister, author of Willpower: Rediscovering the Greatest Human Strength, shows that the early morning is when people are the most disciplined.

As the day wears on, people are less productive, get distracted easier, and are more impulsive. As Baumeister says, “Most things go bad in the evening. Diets are broken at the evening snack, not at breakfast or in the middle of the morning. Impulsive crimes are mostly committed after midnight.”

Since most people continue working in the afternoon and evenings, what can be done to recharge, as willpower diminishes and the afternoon slump—the brain fog—sets in? Some of the best things to do are:

This doesn’t have to be a long break. Just 5 minutes can help you recharge and refocus. During that break, you should get up, stretch, and walk around.

Limit sugary snacks. While things like donuts produce energy quickly, they also lead to an energy crash. Instead, eat a protein rich snack. The energy burst you get from this will last longer.

Lack of sleep decreases intelligence. “A loss of one hour of sleep is equivalent to [the loss of] two years of cognitive maturation and development,” said Sadeh in the book, NurtureShock: New Thinking About Children.

Sleep is so prevalent to intelligence that sleep-deprived 6th graders were only as smart as 4th graders. More so, people don’t notice when they’re sleep deprived. They’re making more mistakes and are less productive, however they don’t realize how slow their cognitive functions have become.

Take a look at Sara Mednick’s, author of Take a Nap! Change Your Life, TED Talk: Give it Up for the Down State – Sleep.

When the evening rolls around, take time off. Successful people work hard, long hours, but they also know that it’s essential they take the time to recharge. Use evenings to relax and catch up with friends and family.

Avoid activities such as playing video games, gambling, and watching TV for over two hours. The American Psychological Association states those activities are some of the least effective stress-relief actions.

Some of the best activities for stress relief are reading, spending time with family and friends, practicing yoga or meditating, exploring a creative hobby, and playing sports.

In the end, successful people embrace this saying: “Get up early, get active and seize the day – success waits for no one.”

Brittany Krueger
Brittany Krueger works in pediatric research and as a technical communicator and consultant. She graduated from Johns Hopkins University with a Master of Arts degree in Writing. When not working, she’s usually taking her German Shepherd hiking or preparing for her next bike century.